The Office of Useful Art (OUA) is collaboration between LJMU, Tate Liverpool and Middlesbrough Institute of Modern Art (Mima) to expand the understanding about Arte Útil and socially engaged art practices as bridges to connect institutions and community projects. The Office was located at the Exhibition Research Centre (ERC) within the John Lennon Art and Design school building. Recovering the local tradition and the history of the school as a mechanics institute, the Office of Useful Art included a range of tools to be used freely by the participants, like a 3D printer, serigraphic, Laser cutting, etc…

In a first step, Alessandra Saviotti and I worked in close collaboration with John Byrne, Lindsey Fryer, Quad Collective and MA students from Liverpool School of Art and Design (Fine Art, Fashion, Graphics and Illustration, Exhibition Studies and Urban Design) to set up the office with images and texts about Broadcasting the Archive and the Educational toolkit.

After a series of conversations, we made a selection of 50 case studies related with some important issues within the context of Liverpool and the Office. These case studies focused on gentrification, health care, food and the Institutional repurpose strategy were on display to illustrate the conversations. It was complemented with the Arte Útil criteria and a world map with the location of the selected projects. Additionally, We collaborated with Quad Collective producing a first version of the Educational toolkit. A notebook was specifically co-designed to be a local tool of exchange and common learning, with the aim to keep it on use for institutions, different constituencies and community projects in Liverpool initiating a dialogue about possibilities of future collaboration. The notebook provided a series of words/terms related with Arte Útil and socially engaged art practices inviting the user to write its own definition and/or adding new terms as a starting point of a discussion. Some of those terms were integrated in the debates that we had during the four days so it appears reflected in this report written in bold letters.

The cooperation and exchange with Quad Collective was continuous and fundamental during my stay to generate a better understanding of Liverpool in just a few days. They shared their methodology and their experience, putting me in touch with some of the community projects and guiding me through the city. Afterwards, I took part actively in the program of the OUA during four days, participating in two informal conversations, a Q&A Session, a workshop, making interviews, visiting local projects, and promoting the use of the archive within students and academics.

Furthermore, I was part of the Jury session of Visible Award 2015, a one-day long conversation that took place as a temporary parliament in the grand Council Chamber of Liverpool Town Hall (organized in collaboration with Tate Liverpool). Finally, on Sunday, I attended to the Community arts Conference as part of the Liverpool Biennial.

On Oct.28th, I started the activities at OUA with an Open discussion with a group of ten people around the idea of “Broadcasting the archive and Arte Útil as a catalyst of change”. First, I introduced Bta and our methodology during its initial stages pointing out the potential of the Arte Útil Archive as a key to ignite discussions about the relation between art, socially engaged practices, local communities, cultural institutions and the importance of bringing this conversation out of the museum and the Galleries.

The participants —among them John Byrne, Mark Wright (FactLab), Lindsay Fryer (Tate Liverpool), and Phd and Master students from the Art and Design School at LJMU—, presented an overview of its own practices and experiences. Questions: How can socially engaged art practices be continuous within an institution? What is the role of the institution? How can we use the archive differently?

We all agree that a main issue was the difficulty on keeping a long-term meaningful relationship between cultural institutions and communities, due mainly to the internal structure of the institutions and the conventional characteristics of the cultural establishment. It is traditionally tied to a funding based temporary projects that forces institutions and organizations to justify the funding proving their outcomes in quantifiable terms so there is not enough room for prolonged processes. Although it is a general problem within the cultural production, it constitutes one important aspect within the local context of Liverpool. It is a city with a wide range of cultural and academic highlights but a very low rate of participation in cultural activities. It was clear that socially engaged art projects are building a bridge between informed and non-informed audiences and a long-term sustainable change. If the institutions could reach these communities it would create new spaces and possibilities of dialogue and Negotiation.

The volunteer Sue Humphreys gave us an extensive introduction to the Homebaked  (AU archive case study N.115). Homebaked is a co-operative bakery and community land trust located just opposite Liverpool’s football club, in the Anfield/Breckfield area. During last decade this neighbourhood fall into decline included in a demolition plan that finally was stalled. Jeanne van Heeswijk, started the project working in collaboration with an achitects studio and a group of 40 young local people to co-design four new homes and rethinking the future of their quarter. They refurbished an empty property implementing an affordable housing scheme, bakery shop and kitchen. In 2012, the group of volunteers and participants did set up Homebaked Community Land Trust to enable the collective community ownership of the properties, and a co-operative business to reopen the Bakery as a social enterprise. Her engagement with the project confirmed its achievement. One of our main concerns about Arte Util and socially engaged practices is that sometimes, we don’t hear the voice of the real participants/users/owners. Sue Humphreys represented clearly this voice. In this case, the success of the project is clearly based in the shared ownership of the space/business by the community.

Afterwards we had an Informal conversation with a group around 25 students and two professors of the Master in Arts & Management from Manchester University. They were enthusiastic with Homebaked project and they showed evident interest for the Arte Util archive and its potential of academic analysis.

During the afternoon I had the opportunity to interview to Lewis Jones and Fran Edgerley from the collective Assemble whose project Granby Workshop (part of Granby Four Streets Regeneration Project) was at that moment nominated, and finally won the Turner Prize 2015. Their practice is based on re-thinking about the way in which the cities are made and come in lived (mainly in a still very transitional top-down way). They believe that at this moment of “austerity” that is cutting the public funding available, it is relevant using the process of make buildings and places as a way of empower people. It provides new opportunities, private founding or small-scale subsidies to building up, so everything is possible in a different way rather than being defined by the market.

A few days later I visited personally Granby 4 streets. The area is historically linked to ethnically diverse and black communities never recovered of the racial riots of 1981, suffering a series of failed demolition/renovation plans, with the subsequent gradual movement of the population out of the area leaving houses that have been neglected. Since 2010 a group of inhabitants that refused to leave got into action to improve the neighbourhood, starting a negotiation about possibilities of renovation, inviting Assemble to work with them and forming a Community Land Trust, “securing assets from the Local Authority and taking the regeneration of their immediate surroundings into genuine community ownership”. (New project Arte Util, n.532). Michael Simon and Eleanor Lee members of Granby community believe that Arte Util archive and the association is a really useful tool for the practitioners as a source of network of groups, individuals and advice. They expressed their interest in become members and collaborate actively with future developments or even hosting the Office of Useful Art in Liverpool. It seemed the same problem of derelict housing in the old neighbourhoods with Victorian post industrial revolution terraced houses that the government has been unable to solve, generating forgotten and “forbidden” inner-city areas in a process of selected inclusion/exclusion of the citizens with areas defined by a lack of services, infrastructures and opportunities in relation with the ones that offers the city centre and other more wealthy areas.

The same day during the afternoon we had the second informal open conversation together with Matteo Luchetti and Judith Wielander (curators of Visible Award), John Byrne, Elly Langlois from In-Situ, Lol Baker from Fablab, and some students. We talked about the Visible Award and how to define a socially engaged art prize and the importance to bring up these practices into the art world.

Finally, closing the programme of the day we had a skype Q&A session with Tania Bruguera and around 20 students of LJMU. We talked about Arte Útil, institutions and ways of curating Political Art (video online).

On October 30th I collaborated in a whole day Workshop organized by Quad about Arte Útil, the Visible Prize and the Languages of production, as part of the international program CAPP (Cooperative Arts Partnership Programme – Tate Liverpool). We ran the activity in collaboration with Lindsay Fryer (Head of Learning at Tate Liverpool). The participants were a group of artists and art students who are participants of CAPP Program of TATE Liverpool.

During the morning, we mediated a discussion around Arte Útil, the criteria and the use of the archive. We analysed the shortlisted projects of Visible Award 2015 through the criteria, proceeding to vote after lunch. The next activity was to analyse the use of language within socially engaged practices. From the lexicon and classification proposed by Steven Wright in Towards a Lexicon of Usership, we reclassified a selection of words as examples “to keep”, “to retire” and as “forms of usership”. This exercise provoked a reflexion about the words, its meaning and its current use. It leads us to an interesting conversation about the relation-opposition-confrontation between theoretical expertise language and the language of the praxis. We all agreed that to avoid exclusion, we need to generate a common, shared language principally based in the local, reconstructing the language we use into the institutions and its meaning, in a process of collective learning, using the institutions as a resource, as an agency, facilitating an interpretative language.

On Oct. 31st I was member of the public jury of Visible Award 2015. I took the chance to Broadcasting the archive asking some questions from the questionnaire included in the Educational toolkit to members of the public. Among them, I did interview Justin O’Shaugnessy and two architecture students. They all confirmed the importance of giving room to socially engaged practices within the art institutions stressing the unquestionable value of Arte Util Archive as a pedagogical tool. They were committed to use the Arte Util Archive in their Academic context as a tool for research.

Also, some skype interviews were proposed with other members of the Jury: Nato Thompson, Matteo Luchetti & Judith, Beatrice Cantanzaro… All these skype interviews and podcast will be uploaded into the website, www.arte-util.org

Links to some practitioners, artists, curators, designers and initiatives based in Liverpool. 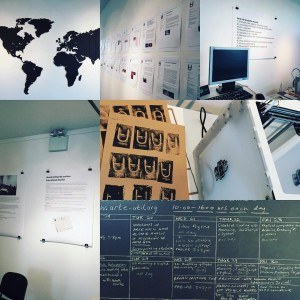 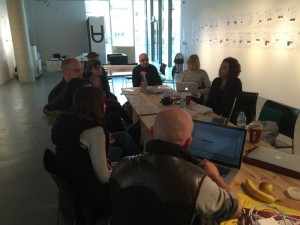 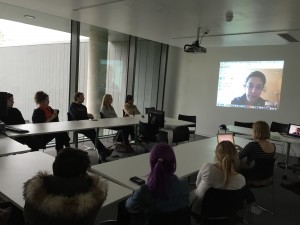 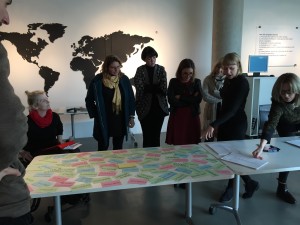 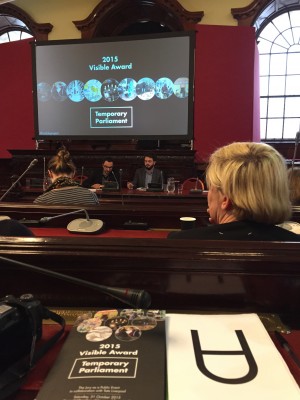 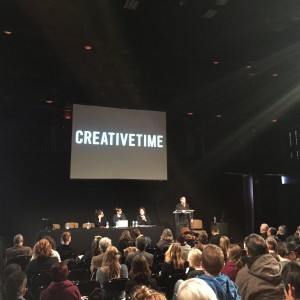 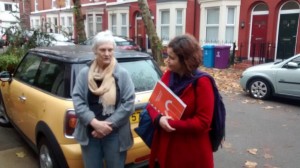 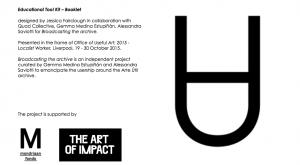