Located on the iconic former football ground, the project consisted in a temporary community garden aimed at promoting and encouraging community spirit through gardening and social activities. The development of the project was organic and guided by the community. Through consultation and dialogues what became clear was the need for a green resource, greater communal spaces and to address how the community could access and use this land. Local residents and groups worked together to create a productive green space on a 2,500m2 derelict site which was earmarked for regeneration and sale. The site contained 110 beds where members of the community, families, organisations, churches, retirement centres and charities could explore ideas of community and growing their own food. Users built an on-site kitchen, which became the heart of the project, a pizza oven, two polytunnels and a library. To launch the library Griffiths and the gardeners worked with the Glynn Vivian Gallery to curate a local festival where cooking, gigs, performance, yoga classes, talks and children's activities were held at Vetch Veg. It is now a successful community garden for over 100 people, supporting an urban community to explore issues of climate, food, support and self organisation together.

The aim of the project is to create new green space in the heart of the city where food could be grown, people could meet and work together to explore culture and community to provides a sustainable and long-term platform that continues to exist as a useful community resource after the projectâ€™s initial 2 year development; to promote an environmental green space that would influence and affect use of local green and civic spaces.

Intended as a 9-months project by the local council, the garden became a permanent green civic space run by its users. As the project developed it was recognised as a critical resource for the community and was granted extended access. Vetch Veg is now considered a Cultural Shift project in Wales, it has informed Arts Council of Wales policy, encouraged the creation of the first Cabinet Member for Sustainability position in Swansea, and encouraged public funding into community green projects in the city. In 2013 an apple planting project was developed and has since spread into the larger green space prompting a local movement called â€˜the people's parkâ€™ to stop the local government from developing the site which has been successful. Vetch Veg continues as a community green space and is now run by its members, many of whom have participated in the project since its beginning. It continues to work in a hyper-local way on community green infrastructure projects through art.
The gardeners care for the site, learning skills such as beekeeping and cob oven building, as well as keeping chickens and preparing meals for each other. The garden became a space for a divided community to work together, exploring cultures and identities through food, produce, recipes exchanging seeds and coordinating the project as a group. 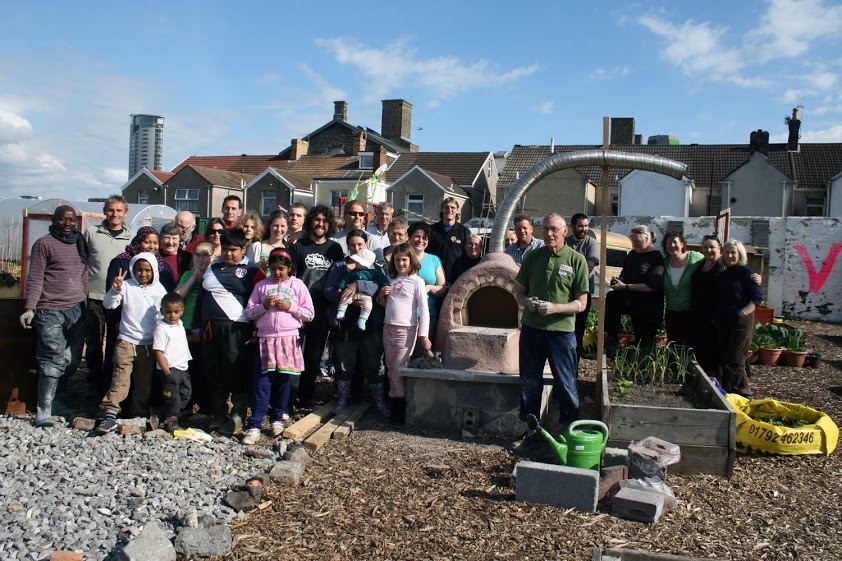