The Para-Site School takes place at the intersection between education, research, institutional practices and participatory art. By operating from inside the university in a parasitical way, the Para-Site school appropriates the universityâ€™s resources such as its faculty, classrooms, labs, equipment, researchers, and so on, in order to create alternative opportunities for minorities, undocumented migrants and artists facing immigration issues to attend college and access higher education in the U.S and Europe. Meanwhile, the school itself serves as a platform for artists, educators and researchers to investigate forms of experimental pedagogy, participation and social interventions in the public sphere as a form of artistic practice and social action.
The project was activated in Pittsburgh (USA), Columbus (USA), Havana (Cuba), Tehran (Iran), London (UK), Cologne (Germany), Portland (USA).

The mission is to function as an elastic - and sometimes antagonistic - space for thinking, making and implementing alternative models where artistic practice, research and education engage underrepresented groups. The project seeks to spark political imagination through enactment, action and forms of co-production.
Using experimental pedagogies, participation and social interventions in the public sphere, it seeks to fold inside out the intellectual discourse and allow other intelligences and postcolonial realities to take the center stage.

Since its conception, the project has become a nomadic platform moving across institutions in Europe and the USA. Castelblanco initiated several art courses in secrecy at the Universities where he was invited as a guest or lecturer, such as at Carnegie Mellon University in Pittsburgh, Royal Academy Schools in London, or art spaces like the Akademie der Kunst der Welt in Cologne. Among the interventions, the Para-Site School created classes for undocumented Latino youth who produced a participatory documentary about their experience as students and their own legal situation, which was then featured in several film festivals across the United States.
In collaboration with Latino day workers, Castelblanco created a temporary business and training format in order to offer to paint peopleâ€™s houses in Portland and Philadelphia as an excuse to stimulate a public debate about immigrant labor, class and misrepresentation. For the project, WPH employed undocumented Latino laborers and provided faire wages in the form of artistsâ€™ stipends, using funds from academic research grants and artistic fellowships granted by U.S. universities.
The Para-Site School used performance and data streaming to extendâ€”virtuallyâ€”Nima Deghaniâ€™s presence to the USA while still being in Tehran, after his visa was delayed by a bureaucratic process between the U.S. embassy in Dubai and a U.S. university. This resulted in a year-long collaboration and an exhibition where Nima was able to interact and communicate directly with other students and publics in the U.S. through the body of Castelblanco, who became a surrogate for the artist.
For an extensive list of the projects carried on by the Para-Site School, we recommend visiting the projectâ€™s website. 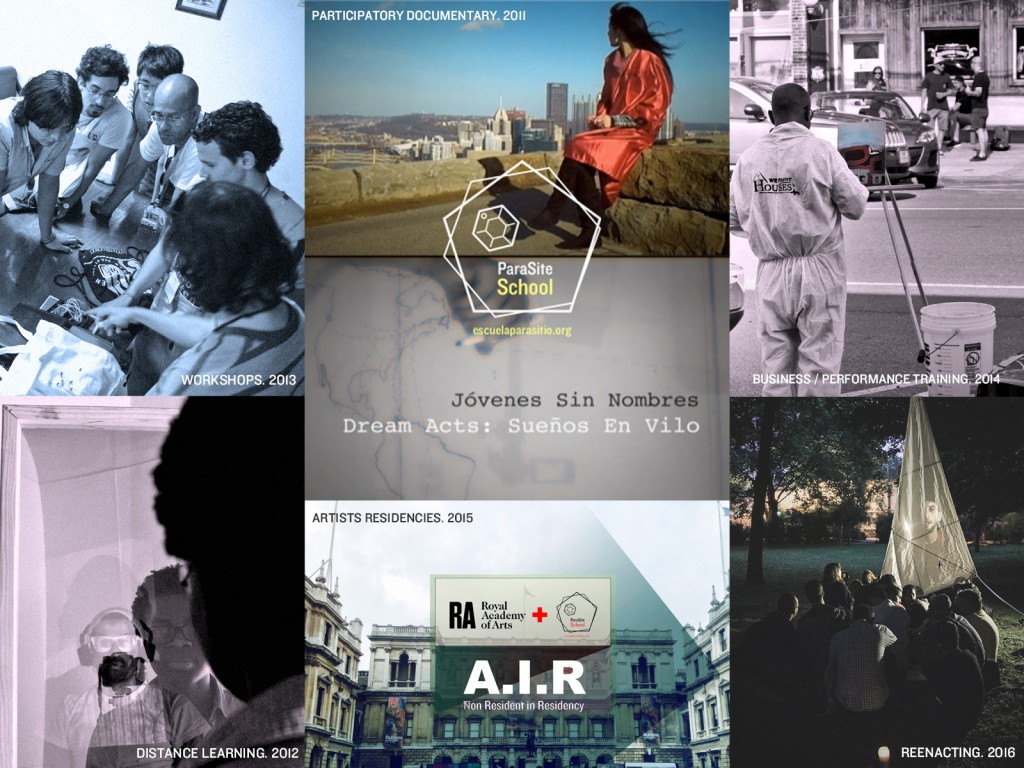