This project, which resembles the Big Brother reality show, was attended by 12 asylum-seekers, that have lived one week in a shipping container nearby the theatre in the center of Vienna. Every day, through a vote by phone or internet people could choose the two least popular people that were ejected and then deported to their native country.
The project was carried out during a period a tense discussion in Austria around immigration and nationalism with Jorg Haider’s nationalist Austria People’s Freedom Party enjoying strong support.

To initiate a discussion concerning the stage-managed cynicism of TV and the cynicism of a society that judges asylum policy on the basis of its majority mandate.

The winner can look forward to a cash prize and the prospect, depending on the availability of volunteers, of Austrian citizenship through marriage.

Immigrants and asylum-seekers in Austria. 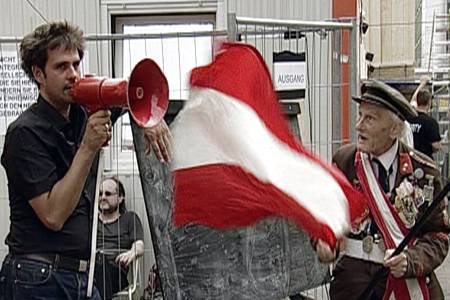