The Domestic Worker App is a hotline outlining rights and laws for nannies with funny episodes about topics such overtime wages, taxes, vacation time, etc.
When you call the hotline number, you hear what sounds like a radio talk show, ‘hosted’ by Christine Lewis (a real nanny), who explains to you the worker’s rights and laws. It operates as an open-source tool that effectively reaches low-wage workers with low print-literacy levels.

The aim is to create a collective of artists, advocates, media makers, low-wage workers, immigrants, and youth to spark social change through constituency-led campaigns.
The Domestic Worker App was designed to inform the 200,000+ nannies, housekeepers, and caregivers in New York State about the landmark 2010 Domestic Workers Bill of Rights.

Fundamentally, better working conditions for nannies.
The Domestic Worker App functions as a key component of a various state's campaigns that seek to encourage domestic workers and their employers to comply with the law.
It has grown to a nation-wide initiative intended for 2.5 million workers across the U.S. 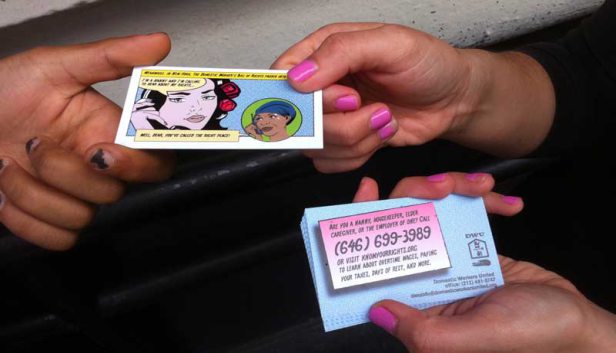