The project consisted of a portable and public lab which used molecular biology techniques to test food for the more common genetic modifications (GM). Users were invited to bring food to the gallery that they thought it could be suspect. The initiators tested the food over 72-hour period to see if users' suspicions were justified.

To contribute to an idea of public science by focusing on issues such as food production that are of direct interest to people, and to make scientific initiatives more immediate and concrete.

To popularize scientific techniques the general public can use to test foods themselves, instead of relying on the potentially dubious labeling and testing provided by their governments and corporations. 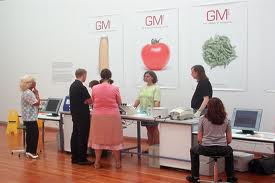