Fallen Fruit began as a collaboration between David Burns, Matias Viegener and Austin Young in 2004 and originally focussed on mapping the fruit trees on or over public property in Los Angeles. Its focus grew to other urban, public spaces; sidewalks, streets and alleys. They termed these findings as â€˜public fruitâ€™ and started to think about how they could expand this project to regenerate neighbourhoods and urban spaces. Hand drawn maps were produced and distributed covering various urban cities and towns â€“ intending to encourage others to continue in this way by wandering, foraging and seeing the new potential in their urban spaces. For this reason theyâ€™ve avoided geo-tagging online maps, which give exact locations for the trees. However, a separate project exists called â€˜falling fruitâ€™, which works on very similar lines, does use this method. Fallen Fruitâ€™s maps in contrast do not follow exact spatial proportions, but each map has a certain amount of play in the choice of which streets are included, so that often these express unusual shapes present in the landscape: an animal, a mythical shape of just a gesture used to break the grid on which most cities are built.

To change the way we think and live in our cities and neighbourhood by challenging the meaning of place and the way our familiar spaces can be put to new use. To highlight the way in which fruit can be used to rethink the way people live, to evoke a utopian possibility whilst being solidly pragmatic. To encourage explorative wandering, foraging, and discovery.

The maps have a liminal life and are widely circulated and often copied. Fallen Fruit often activate the maps by using them to lead tours through actual sites. These tours start in the evening so they can meet the residents and talk to them. The residents are often as surprised as the people on the tour. The intangible benefit of these maps is most important to them: the emergence of new conversations around cities and neighbourhoods, gardens, public space and the meaning of food. Fallen Fruit believes in a kind of art-making in which the product is social and generative.

Initially the maps were intended for the homeless, however their use has broadened to local residents and others as the maps live online and are reproduced freely and widely on the internet. 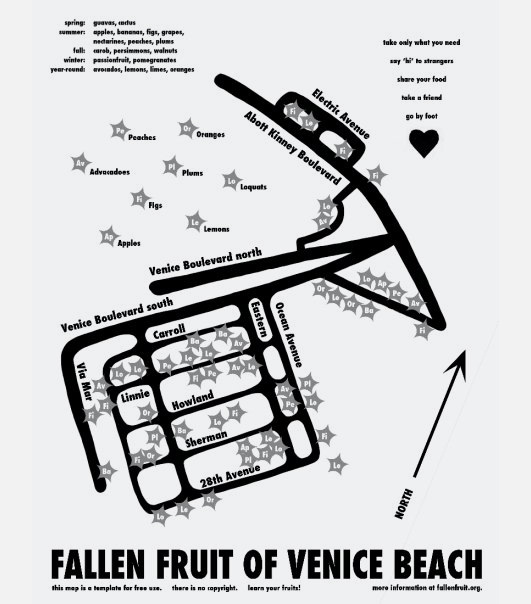