After closing the doors of The Museum of Arte ĂtilÂ at the Van Abbemuseum in Eindhoven, we felt the need to expand the effect and affects that the archive had produced in those who used it during the exhibition. We wanted to keep alive all that energy, inspiration and empowerment, the sense of the call to action, and the momentum. For this reason, we conceivedÂ Broadcasting the archive, as an independent project aiming at fostering and emancipating the use of the Arte Ătil archive through a year touring program of activities and actions. To do so, we invited different institutions and organisations in Europe and United States to shape the program with us. We thought about activating an experimental and organic program nurtured by collaborations and partnerships, that could extend and implement the potential of the archive and the Arte Util practice âintended as a movementâ as a tool. It became an excuse for us in order to expanding the research around artivism and social practices. The primary methodological line was to use selected case studies to arise the discussion and to stimulate connections between practitioners, constituencies and institutions around local urgencies and fundamental issues. Each chapter was different, responding to a particular context, taking into account the organisation and participants. It evolved organically, developing a methodology with a dialogical approach based on collaboration.

After finishing the program, we would like to consider the participation in relation with Broadcasting the archive and Arte Ătil. We would be keen to re-think the implications of participation: the idea of co-authorship as theorised by Roland Barthes; the scale of real engagement; and the reasons for involving local communities and practitioners in the space of the extraterritorial reciprocity. It is fundamental to underline the importance of the circumstances and the âlocal knowledgeâ in bolster any project, action or a general socially engaged practice. Artists and Arte Ătil practitioners are opening the possibility for collaboration and participation, transforming the idea of âspaceâ in âtimeâ of cooperation and intervention. It is the time of common as Stephen Wright affirms.

In this text, we will focus on our last activity, Broadcasting the Archive #9, at mima (October 2016, Middlesbrough, UK). Enacting the definition and origin of the word participation asâpartakingâ, [(*from pars (genitive partis) âpartâ (see part (n.)) + -cip-, weak form of stem of capere âto takeâ (see capable )]2, bringing together our voices as different parts of a whole, individually and in our mother languages.

Read the text on rootsÂ§routes 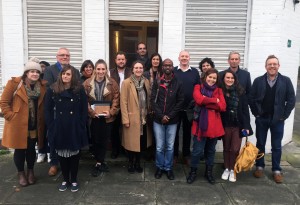